There is a famous blend , Dunhill Royal Yacht, that is now gone with the winds of History as Dunhill folded up shop.

I have an extraction of this that was made by [mention]Kinnikinnick[/mention] and it is just spectacular.

Because I can no longer get the feedstock I set on a mission to try and duplicate it from extractions of Pure Leaf Varietals. Because, undoubtedly Dunhill pressed or processed their original blend in some fashion I will most likely never be able to clone it exactly.

Here is the description from tobaccoreviews which gives a lot of clues as to how this might be cloned:

Here is another review:


. The recipe behind "Royal Yacht" remains a secret, but the general formula is crushed empire Virginias, perhaps doused in honey and vinegar, which are mixed with some Burley and pressed into cakes, then separated and soaked in a "secret sauce" which resembles a mixture of cognac and fruit juices that convey some of the sweet-sour spiciness of Perique without having Perique in the blend. In this way, "Royal Yacht" is like a big brother to "Elizabethan Mixture," which does contain Perique, and fits well within the Dunhill product line as well as appealing to those who like a stouter blend in the English style.

I have got pretty close with these two following recipes, but I have more work to do.

Here is my current testing:

and then I moved on to this one:

NOTE: Since the two Virginias are not 'ready' as they are still infusing and have several more months to go, I did use 'skimmed' samples out of the jar. So the final proportions will most likely change when it all falls together later. I just wanted to see if I could begin to approach the flavor profile and get to a potentially successful clone. With this initial testing: I think it can be done.

NOTE: Update 6/22/2020: I have finished and filtered the Virginia's and their flavor profile turned out extremely well. When experimienting along with them, it turns out that besides using them to clone Royal Yacht they also will form recipes that closely resemble American Cigarettes. Please see:
viewtopic.php?f=15&t=49&p=192#p192
for details on those blends.
Top

When talking about my use of Perique as a way of creating a flavor profile to mimic (clone) the famous Dunhill Royal Yacht, [mention]Kinnikinnick[/mention] had this to say:


I know the RY is a combo of 3 Virginia’s... but, I’m not going to sweat trying to find that combo. If a little Perique can give it what it needs, so be it..

This brings up an interesting discussion about methods of approach that might be used when trying to re-create or clone an existing tobacco blend from a commercial pipe tobacco or cigar manufacturer.

I think there are two possible methods of approach:

1.) find as much information as possible about the tobaccos and methods of preparation used in the original blends and try to get as close to duplicating that as possible.

2.) carefully understand, by sampling an extracted vapeable sample of the original blend, try getting as close as possible using the selection of flavor profiles that you have in your collection of extractions no matter their named feedstock origin.

I am a fan of the second method. Here’s why: I think that, although the first method might work in some cases, it has a couple of big defects.

One is that information on how the blending house created the blend is notoriously ridden with “street talk” and wildly inaccurate “guesses”. As an example, take the sample of Royal Yacht in question. Although the base of Virginia is accurate, the suggestion that it has a “plum” topping is just a rumor that was started by several tobacco reviewers. Dunhill never, at any time, said they used Plum flavoring or that they used any topping at all. The second issue is that the flavors from the original ingredients of the feedstock will react from combustion very differently than from extraction into a vape. This alone might give you a flavor chase down a road that goes nowhere in terms of creating a vape work-a-like.

I can’t resist telling you a one liner that, of all things, I heard from a veterinarian, when I had a sick cat on his table. I was curious how he approached the problem of diagnosing and treating an animal that will not respond verbally to questions like, “When did you start feeling bad? Where does it hurt? “ he said, “Since we can’t get an accurate history we just deal; with what we see in front of us”. So true.

In the interest of ‘science’ I tried adding some INW Plum synth to a couple of possible blends of extracted Virginia. The experiment went in the wrong flavor direction. It took me away from duplicating the Royal Yacht as, typically, all my efforts to add synths into Pure Leaf Extracts do. As I thought would happen, I got a flavor profile that had sharp 'node points' of single and distinctive single flavor elements that spiked above the base profile. No matter how little I dialed back the addition percentage, that background drum beat of “There’s synth flavor spikes here..” No matter how hard you try to ignore it, it interferes and annoys.

Another point of interest is that the combining of Perique into the Virginia leads to a very different taste perception across your palate as either the Virginia or the Perique alone. The blended flavor is remarkably different in total character than either of the two bases. Unfortunately since this is just text written into a BBS message board and not ‘smell-a-vision” I can’t possible demonstrate this phenomena. Try it yourself.

This sort of flavor blending and creation effect is well understood by chefs. Diagrammatic Flavor Wheels are common in professional Chef and Culinary schools. The site https://www.famous-smoke.com/cigar-flavor-wheel created one of their own.
Click the link for a BIG version of this thumbnail: Using the wheel in regards to the Royal Yacht, starting from "Plum", you would be advised to move 5 to 10 places up the Flavor Wheel into the realm of "Citrus" and experiment adding components from that sector perhaps Lemon, or move in the opposite direction 8 places down to "Fermented" and choose Tannin. This is where I went with the addition of Perique and it worked! I suppose, if you really stretch the point you could possibly say that in the extraction sample I have of real Dunhill Royal Yacht there ~might~ be a component in there from moving up to the Citrus part of the wheel, but, even if that is true, it is very ~very~ subtle. 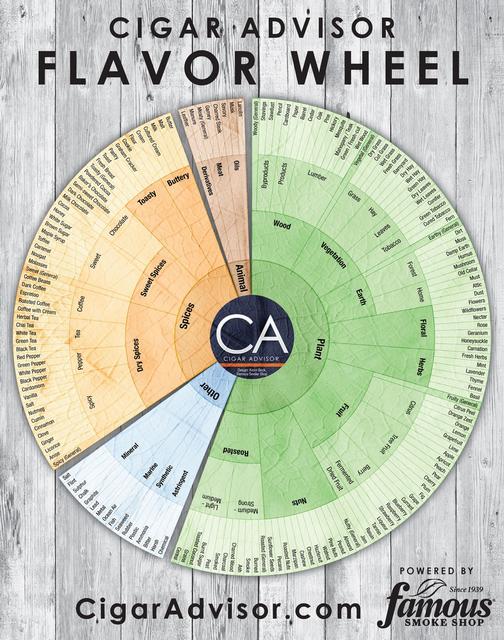 well, I guess I have been living under a rock, and i did not realize that the commercial blenders have tried their hannd at cloning this fine tobacco. This came to my attention when @ Kinnikinnick happened to send me a PM with a picture of the Peterson try at this old line tobacco.

So I have a tin on order, and we will see what we get

I don't trust the commercial "re-makes" of old line tobacco, as they are never what the original was.

it seems a difference in opinion on the "reviews".. here is a couple of street reviews I came across:


Posted by Will on 22nd Dec 2020
Been smoking pipes since the late 60's. I have tried too many blends than I can remember, most are forgotten. A tobacco like Royal Yacht will not be forgotten, excellent tobacco, IMO. I prefer Royal Yacht a little dryer than many smokers would like but each to their own. I detect no difference between Dunhill and Peterson's. I sincerely appreciate that Royal Yacht is still with us in original form.


Posted by Nicotine Man on 20th Nov 2019
The Peterson version of Royal Yacht is a weaker strength, harsh version with no discernible plum whatsoever. What once I would have said was perhaps the best tobacco in the world is merely a solid average. I don't know what happened, but something did. 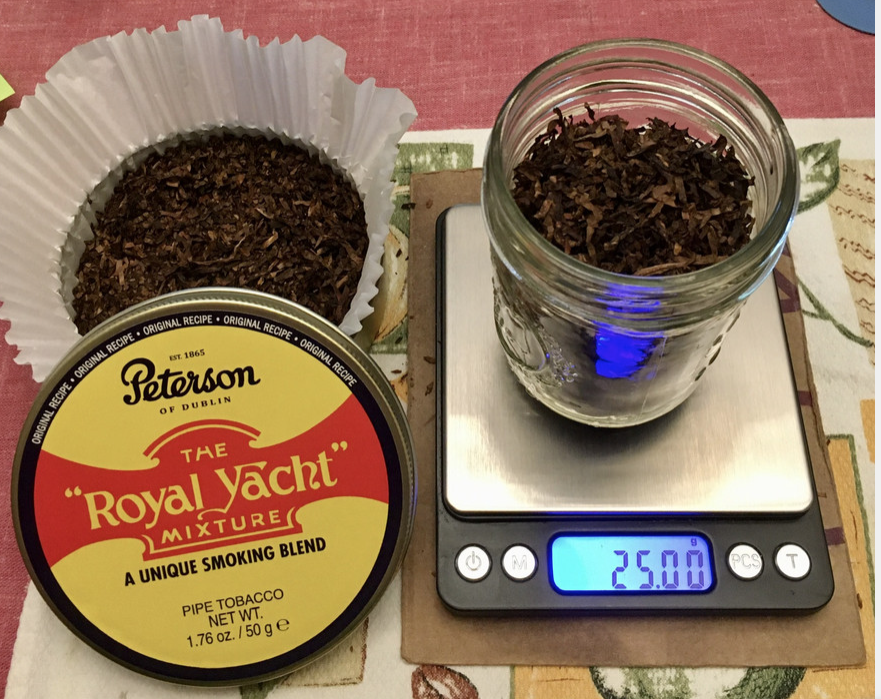 Since this subject has raised its ugly head again, (

) I thought I would return to doing another A/B test to see if my memory was playing tricks on me or not.

So: - I have an original sample of the the true (and very rare!) Dunhill Royal Yacht extract as provided to me by @Kinnikinnick
- and I remixed this clone:
Royal Yacht Clone Tester
4g LO Bright Leaf Virginia Flue Cured - Sweet
2g LO Perique.
8g 25/75 PG/VG
0.7 Nic…

Sure enough, the clone is working well. To be very critical I will make the following two observations:

- a cosmetic item: when mixed as a final vapeable juice the color tint of the mixed two samples is very close.
Of course that is just not a meaningful metric, but it is nice that the clone 'at least looks like the original'

-the flavor profile comparative of the two samples is very close: The Original has a very slightly more acidic overall impact on the palate, but I would not call it 'citrus' but just a slightly lower pH that can be detected on the tongue. The clone lacks this component so it gives the clone a more rounded and mellower feel on the palate. I don't want to overstate this, as the slight acidic feel is very very subtle and does not take the overall profile away from its good result as a 'very passable clone' 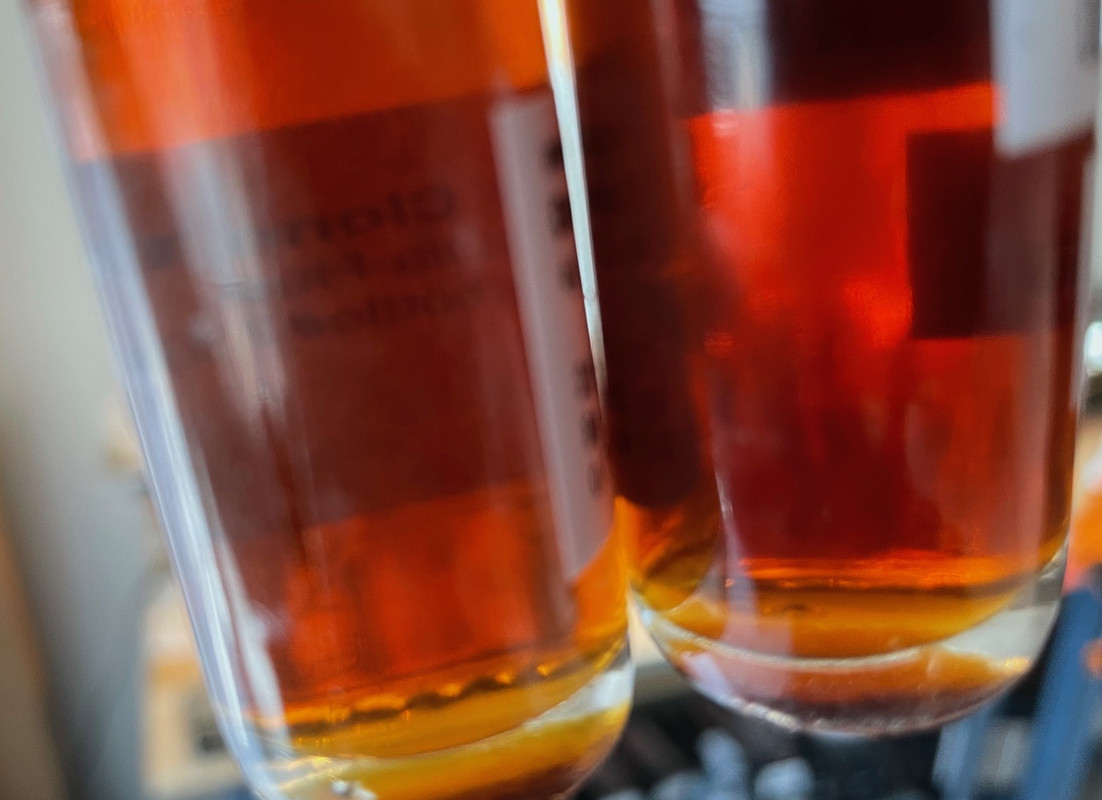 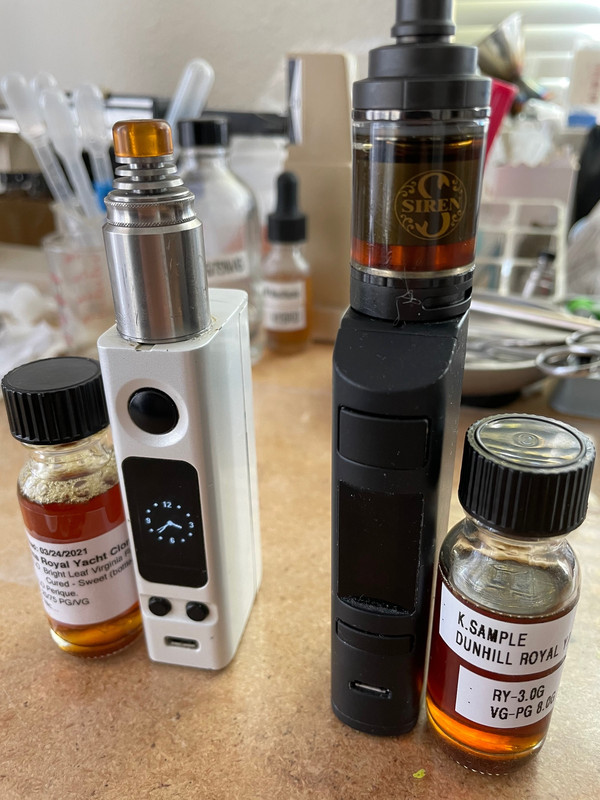 I’m glad you’re having success in creating the clone of RY with the single leaf varietals in your stock. Cloning any liquid has always been a very frustrating, hit or miss project on my part.

Many of the reviews I’ve read on the Peterson’s RY have been wildly different from each other. There’s a lot of “love/hate” opinions out there on the matter.

My best guess on what makes each batch better or worse, would be the feedstock used in the process. The leaf from year to year is not going to be the same. Thus, there are going to be changes to the flavor of the tobacco over time. Again... just one man’s opinion on the matter.
Top
Post Reply
5 posts • Page 1 of 1